There’s no way to feel good about “The Help” have previously stated that I would not see the movie The Help, and I made this claim on two grounds:

1) Ablene Cooper who sued Kathryn Stockett for a mere $75,000 because Stockett stole her story had her lawsuit dismissed due to an elapsed statute of limitations.

2) Not only did the movie earn $50 million in the first two weeks, there is a slew of The Help merchandise including a Home Shopping Network line of pots and pans from Emiril Lagasse (how does that make sense?) and the Republic of Tea’s The Help Tea – Caramel Cake Black Tea (don’t get me started). All additional profits are for people who never had to experience the demeaning injustices profiled in the novel.

I didn’t want to participate in adding to Ms. Stockett’s wealth or publicity, but I’ve been offered so many speaking engagements to discuss the movie since reviewing the novel, that I felt compelled to actually see it.

And I can immediately see why some people might have enjoyed the film. It’s a feel-good movie with an all-star cast including Sissy Spacek. A charming Emma Stone plays the well-intentioned protagonist, “Skeeter,” a young Southern white woman who wants to write about the “Colored” housekeepers of Mississippi. She claims that Margaret Mitchell glorified the Mammy Figure, but no one asked Mammy how she felt.

We are led to believe that because Skeeter asks Abilene, the Black maid, how she feels that she is not implicated in Abilene’s segregated reality. We learn however that Skeeter’s mother is a member of the Daughters of the American Revolution, and that her boyfriend is a segregationist. These facts are not explained, and decent music coupled with “Mad Men” fashion seduces us into enjoying the plot. 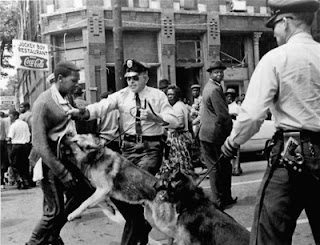 We are not expected to question that the story is set in a Klan-less 1963 Mississippi. There is no context for Governor Ross Barnett, no illustration of the real life violence of the White Citizens Council, and no explanation of the heroic life of Medgar Evers. In fact, the only Black male characters in the movie are the Preacher and Minnie’s faceless husband “Leroy” who beats her.

What the audience needs to consider is that “Sassy Minnie” isn’t a talking cookie jar, and Minnie and her female relatives were in more danger from the white men in town than any Black man in their family. This story is a southern segregation fantasy that erases the unwanted advances of the powerful white men of Jackson. There is no allusion to this, and if you are born in 1993, like an incoming first year college student, you might not question why there aren’t any lighter skinned Blacks in the movie who look oddly enough like the mayor. Minnie is our nation’s Nafissatou Diallo and neither one of them got any help.

The idea that poor white trash Celia would have befriended her Black maid is absurd. History tells us that impoverished whites would have behaved worse than the wealthy Hilly, who is brilliantly played by Bryce Dallas Howard. The problem with this character is that Hilly is depicted as an aberration as opposed to the norm. This also glosses over the real-life terror experienced by Black women at the hands of white women during this time period.

The only recourse that Black women have in this movie is to cook with their own feces and “sass” the women who can hire, fire, and incarcerate them.

Even though Abilene’s closing line states her satisfaction that she had the opportunity to share how it felt to be her, I left wanting to read the book or screenplay that she writes. In that version Cicely Tyson would have been more than a backdrop, Viola Davis would have been the lead actress and Octavia Spencer could liberate Aunt Jemima without baking chocolate shit pie.